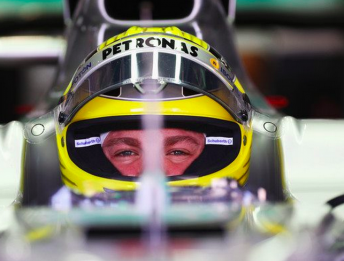 Mercedes has opened up its Monaco GP campaign with encouraging pace after its two drivers set the bar at the Principality.

Nico Rosberg reaffirmed his top pace from the first 90-minute session by taking the top spot in Practice 2 in 1:14.759s. Rosberg has been the poleman at the previous two races.

His team-mate Lewis Hamilton was second fastest in 1:15.077s as Mercedes again showed they are close to perfecting another competitive qualifying set-up.

As teams sorted out race and qualifying set-ups on the super soft tyres, it is looking increasingly likely that the Silver Arrows and Ferrari have the firepower to pull off an all important front row berth for Sunday’s 78-lap race.

It is the first time the super soft Pirelli rubber has been used since the Australian Grand Prix at Albert Park in Melbourne.

With an evolving track the Mercedes and Ferrari line-ups faired far better than their rivals although they were not immune to overheating and graining tyres.

Although Grosjean hardly had a trouble-free session after smacking the barriers at Sainte Devote and tearing off the left-front of his Lotus just over 30 minutes into the session when running on the super softs.

Next best were Jenson Button in encouraging signs for McLaren with Sebastian Vettel and Paul di Resta filling the back of the top 10.

Vettel was the last to join Practice 2 after major changes to the rear of his Red Bull before he was clear to filter onto the track around 25 minutes after the green flag waved.