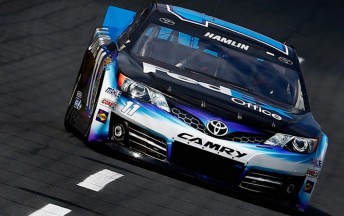 Denny Hamlin’s drive to get back into the fight for the NASCAR Sprint Cup continues to gain momentum as he scorched to pole position for this weekend’s Coca-Cola 600 in Charlotte.

In what will be only his second full championship race start since injuring his back in late March, Hamlin set a new track record with an outstanding 195.624 mph (314.836 km/h) lap in Thursday night qualifying.

The Joe Gibbs Racing Toyota driver, led eight drivers who went under the previous track record of 193.708 mph (Greg Biffle 2012). It also marked the seventh track record in 10 qualifying sessions this season (two were rained out) for the new sixth-generation Sprint Cup car, which made its debut this February in Daytona.

“Proud to be back on the racetrack,” Hamlin said. “We’re really getting things going right now.”

It is Hamlin’s second pole of the year, the other coming 22 March at Auto Club Speedway in Fontana, the same race weekend he injured his back in a last lap accident involving Joey Logano.

“It danced around a little bit, but it wasn’t bad.  We are a lot better this week and the car is faster.  I can drive it pretty hard, but we need to tweak it a little bit more.

“The DEWALT crew will work on it, and we’ll be ready for Sunday.”

The Coke 600 will be run Sunday evening US time.