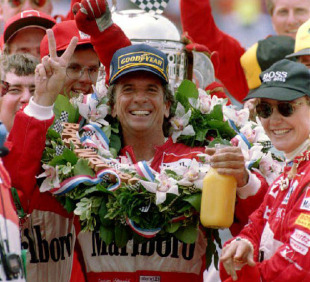 It was a time when CART and IndyCar racing were at the height of a golden era.

The line-up for the 1993 Indianapolis 500 was as good as it gets – current and former F1 world champions and IndyCar legends added to a brilliant high-speed cast of characters.

Nigel Mansell had emerged from his all conquering season in F1 when he was crowned World Champion in 1992 as a instant hit in the months building up to Indy.

He took pole and won at his first start in the American open wheelers at the Gold Coast in March, 1993 and then at his first attempt at the Indy 500 in May he had led the race in the dying laps when a yellow was thrown.

Lyn St. James had stalled meaning the field went into a holding pattern with less than 20 laps remaining, throwing Mansell’s momentum out of kilter.

When the word was given to go green, unaccustomed to such environments Mansell did not fire off turn four as he should and he lost the lead.

The wily veterans of super speedways were waiting to pounce with Emerson Fittipaldi and Arie Luyendyk swooping like eagles on wounded prey.

Fittipaldi, the 1989 winner, leapt into the lead while Luyendyk took second.

Then eight laps from the finish Mansell smacked the wall coming out of turn two enough to do some damage but not enough to bring his race to a halt.

With five laps left Fittipaldi had the bit between his teeth in his Chevrolet-powered Penske and he eventually scored a resounding win over oval specialist Luyendyk with Mansell grinding out third.

It was an epic race, one of the greats that has made the Indy 500 so rich with colour and history and the embodiment of motor racing Americana style.

Mario Andretti had led the most laps at 72 with Mansell leading 34 while Fittipaldi had led just 16, and they just happened to be the tours that counted the most.

Then in victory lane just as he did on the streets of Surfers Paradise in early 1992, Fittipaldi took a bottle of orange juice, proclaiming he was supporting his family business back in Brazil.

However the fallout from turning down the traditional offering of a bottle of milk at Indy turned nasty with negative press and fans turning on the double F1 World Champion.

It was a rather controversial end-play which soured an otherwise memorable 500 that involved some of the biggest names in world motor racing.