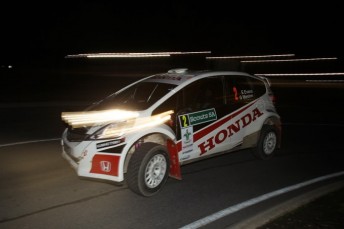 Eli Evans has got the early march at Rally SA. PIC: Stuart Bowes

Honda’s Eli Evans has dominated Friday’s proceedings at the Scouts Rally SA, winning the day’s power stage and the opening super stages at the third round of the Australian Rally Championship.

Evans heads Scott Pedder (Renault) by one second with Brendan Reeves (Mazda) 2.6 seconds off the lead.

The twin 1.14km night time super-stages where run at the Gawler Showgrounds and featured an equal mix of tarmac and gravel.

Evans pounced early, setting a benchmark time of 59.9 seconds for the remainder of the field to better. Despite the best efforts of his rivals Eli went unmatched, until Nicholas Box started determined to knock him off the top spot.

Box’s run went almost immediately awry when he confused one of the stages first corners with an access road, forcing him to jump on the brakes and perform an immediate hand brake turn to head back in the right direction. In his haste to make up the lost time he then spun at the stages tarmac hairpin, the result the slowest time for the stage some 15.9 seconds slower than Evans.

Mechanical problems continued for Nissan driver Will Orders, who missed this morning’s Power Stage with fuel feed concerns, when he was unable to make the start of the first stage. It’s unclear if Orders will make the Saturday stages, and what time penalties we will incur for failing to contest the opening two stages.

Similarly Brad Sanders has endured concerns with his Super 1600 Fiesta, having run on three cylinders during testing, he also suffered issues during this morning’s hit out in the Mt Crawford forests. The problems continued tonight, Sanders setting the slowest time on the second stage which saw him drop to 58.1 seconds off the lead.

In the National 4WD category Justin Dowel has put a $2,000 prize fund up this weekend for any fellow four-wheel drive contender who can knock him off, with Dowel finding himself five seconds down in fourth behind leading local hot shot Declan Dwyer.

Nine stages will be run throughout Saturday.