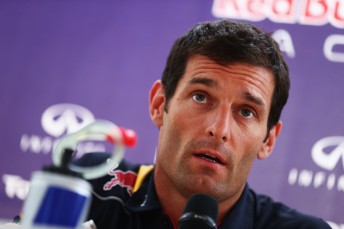 Mark Webber has voiced concern over the direction F1 has taken in pursuit of the entertainment factor.

In the eve of the opening two practice sessions for the Monaco Grand Prix starting this evening (Australian time) Webber continued to vent his disharmony following the Pirelli tyre issue.

Right from the opening race of the season in Melbourne Webber did not hide his angst over the Pirelli tyre which has been built to aggressively degrade.

“You ask any F1 driver, yes it’s frustrating to sit behind a car for a full grand prix distance,” Webber told Autosport magazine.

“But also my race in Shanghai 2011: I’m arriving on guys like Fernando [Alonso] and Lewis [Hamilton], I’m creaming through them at about 2.5s per lap because I’d saved tyres from qualifying. That’s not right either.

“Lewis Hamilton getting lapped [at the Spanish Grand Prix], having been with Alonso until lap five or six, that’s not right for me. So it’s gone a long way out the other way.

“Barcelona is a tough circuit but it’s a racing track, these are Formula 1 cars. The writing was on the wall in winter testing.

Webber is searching for his third win on the streets of Monaco this weekend which will edge him closer to the immortals of the most glamorous race on the calendar.

The Australian was a winner at the Principality in 2010 and last year and also won a F3000 round there for Super Nova in 2001.

Check out the F1 Monacco Race Guide below