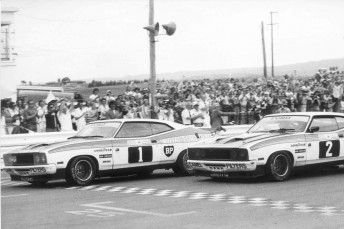 The Ford Falcon will live to fight another day on the track, for the next few years at least, in the wake of the crippling announcement today of the closure of local manufacturing from 2016.

With the Falcon officially receiving its last rites three years and a few months ahead of time, Speedcafe takes a look back at the legacy the brand will leave behind in Australian Touring Car/V8 Supercar racing.

The iconic Aussie nameplate has been responsible for a huge slice of domestic motor racing history since the 1960’s.

The first of 12 wins for the Falcon in the Great Race at Bathurst was the XR GT with drivers Harry Firth and Fred Gibson in 1967.

There was a period from the mid 1980’s until 1993 when Falcons had a hiatus from competition, making way for the Group A era of the turbo-charged Sierras.

Of the 23 championships won by Ford since the first Australian Touring Car Championship in 1960, Falcons have collected 15 of those titles.

The first of which was through Allan Moffat in an XY GTHO, the last was won by James Courtney in a Dick Johnson Racing FG Falcon in 2010.

Ford Falcon by the numbers: