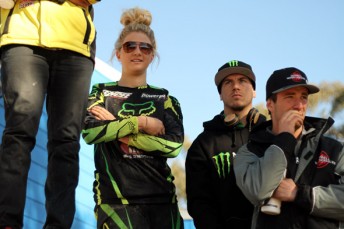 Finishing the opening round in the Netherlands in second place for a German team, her one round deal with them came to a close and she was very close to walking away from the sport:

“It’s been an emotional rollercoaster the last couple of weeks,” Rutledge explained. “I’ve been at the point where I’ve been ready to give up because I feel like I’ve proven I’ve got the talent to hold my own against the best in the world but we just couldn’t get anything happening overseas.”

The lifeline comes in the form of French team Rockstar Bud Racing Kawasaki, which allows her to continue her affinity with the green motorcycles.

She will jet out of her Picton base next week to France to collect her KX250Fs before heading to round two of the Championship in Slovenia on July 9.

“I’m going to go over there and hopefully will make my dream of becoming World Champion come true,” Rutledge added. “I’d really like to thank my family, friends and supporters for everything they’ve done and Kawasaki for the support they’ve given me here in Australia.”

She will compete against another Australian in Jessica Moore who also had a solid opening round of the World Championships. KTM pilot, Moore sits sixth on the points ladder 22 points off of Fontanesi’s lead.