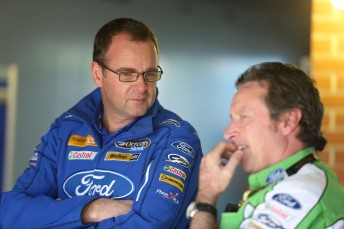 The position of the sole Ford factory team in V8 Supercars remains unchanged following the explosive news that the blue oval will cease local manufacturing from 2016.

FPR has responded to confirmation earlier today that Ford will no longer be able to sustain local manufacture which includes the Falcon, Ute and Territory SUV.

Co-team owner Rod Nash says that discussions are underway between his operation and Ford for an ongoing partnership.

FPR’s current three-year contract with the blue oval maker runs out at the end of 2013.

Nash and Rusty French were announced as the new owners of FPR earlier this year after buying out British motor racing identity David Richards.

“While we are of course sorry to hear that Ford will be ending local production from October 2016, this by no means signals an end to Ford in Australia, nor to the close relationship we have with the company,” Nash said in a prepared statement.

“Ford is a robust global company and one that has taken a tough decision to ensure the future viability of its business here in Australia. It will continue to be a significant force in the Australian automotive landscape.

“We are proud to fly the Ford flag and look forward to doing so for years to come.”

FPR have continued to show promise over the years but as yet have not been able to pull off a V8 Supercars Championship title nor a Bathurst 1000 victory.

Such successes are no guarantee of maintaining manufacturer support however they go a long way to validating any driver or team performance in the category.