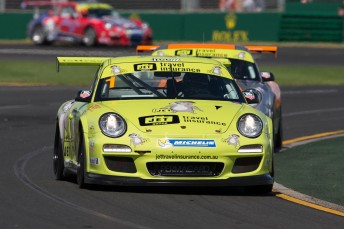 Craig Baird in impeccable form at the Albert Park meeting

Crack Porsche racer Craig Baird has produced a shock by plucking Kiwi John Penny from obscurity as his co-driver for the Rennsport meeting at Sydney Motorsport Park this weekend.

The unique format of the round means that the twin one-hour races for the third round of the Australian Carrera Cup Championship must have shared driver combinations.

Penny, a builder who is based at Taupo, has had precious little racing since abandoning his NZV8 campaign in 2011. He paired up with Paul Manuel in the final two V8 SuperTourer endurance races in New Zealand late last year.

Baird has enlisted his services at what is a crucial round of the Championship even though Penny has not raced in Australia before nor raced a Porsche.

The thinking behind signing up Penny was not so much for headline lap speed but ticking over points.

“For me, my choice of co-driver was not so much for outright speed, but someone who could deliver the car back to me preferably in one piece and collect some good points.

Baird goes into the special Rennsport edition of the Championship as the leader of the Australian Carrera Cup Championship after the opening two rounds. He has amassed 342 points, 40 clear of Steven Richards and 84 ahead of third-placed Nick Percat.

“It’s really just a building block for the championship. John Penny has never raced a Porsche and never raced in Australia, so I can’t go out there and expect him to be one of the fastest Elite Class guys, but hopefully he can be one of the most sensible.”

Baird has welcomed the shared driver format which has attracted a decent mix of drivers outside of Carrera Cup including V8 Supercar racers Lee Holdsworth, Tim Slade and Alex Davison.

“It’s always nice to see guys from another sand pit come and play in our one,” Baird commented.

“What we forget sometimes is that Carrera Cup is built through our core competitors, which are the likes of Marc Cini and James Koundouris and Max Twigg. They are the core part of the championship and without them, the likes of Percat, Richards and myself don’t have anywhere to go and play.

“It’s vital for our category that those guys enjoy their racing and having a meeting like this where they can choose whoever they want to race with and gives them the opportunity to get a great result and keep them enthusiastic about the championship.