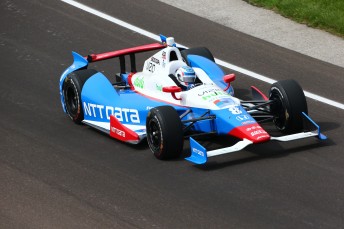 In the wake of the qualifying and bump day weekend, IndyCar has announced penalties following technical inspections of three cars.

The #8 Chip Ganassi car of Aussie Ryan Briscoe was fined $5 000 for a rear wing anomaly, while the #15 Rahal Letterman Lanigan car of Graham Rahal has been fined $10 000 for an alleged cooling breach.

The #17 RLL car of Michel Jourdain jr was fined $1 000 for an alleged rear underwing irregularity.

Jourdain jr was the only car not to make it into the 33-car field following Bump Day.

The breaches relating to the Briscoe (23rd) and Rahal (28th) cars do not affect their grid positions for the 97th running of the Indy 500 on Sunday.

Katherine Legge has squeezed into the final position in the race in her Angie’s List Schmidt Peterson Pelfrey Honda.