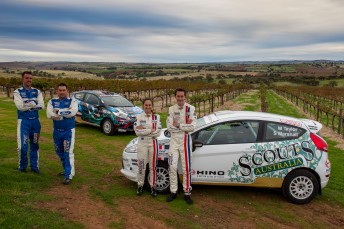 Ford Innate Motorsport to run a pair of Fiestas

A pair of Ford Innate Motorsport entries will do battle in the Scouts Rally SA round of the Australian Rally Championship this weekend.

Adrian Coppin and Molly Taylor will join the round in a pair of Ford Fiesta R2 machines in the 1600 Cup and Manufacturers titles, the first time the team has entered a two-pronged attack this year.

As the Australian Rally Championship (ARC) returns to South Australia for the 2013 Scouts Rally SA, the field will see two Ford Innate Motorsport entries thrown into the mix as Adrian Coppin and Molly Taylor join the fray in Ford Fiesta R2s entered in the 1600 Cup and Manufacturers title.

Ford Innate Motorsport is returning to South Australia having competed in the event last year, where they finished 4th in the 2WD category.

There is a much stronger 2WD field this year, following the decision to make 2WD the premier category in the ARC.

“Our goal will be to finish both heats and maximise the points score for Ford in the manufacturer’s title,” Coppin said.

“And it will be fantastic to have Molly Taylor in the team to also help us score points for Ford. We haven’t had two cars competing for Ford at a round of the ARC so far this year, so we are looking for some good finishes and to take a health bag of points away from the event.

“Personally, I am also looking forward to having Molly compete because I want to measure my performance against a peer in an identical car. At this stage no-one else is running a Ford Fiesta R2 in the ARC and it is pointless looking at your times against the outright G2 cars, so by the end of the weekend I will have a really good idea about how well I am driving.

“And rest assured I will be driving as hard as I can, because there is an unwritten rule in motorsport about beating your team mate.”