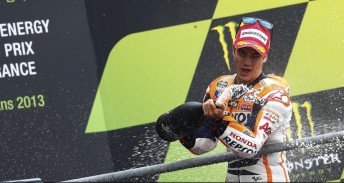 Honda’s Dani Pedrosa hailed his victory at Le Mans as “special” after conquering tricky wet conditions to take the chequered flag and the MotoGP championship lead.

The 27-year-old from Spain recovered from a fall in qualifying and two mistakes, which cost him the race lead briefly last weekend, to secure back-to-back victories in the 2013 MotoGP World Championship.

The new championship leader couldn’t hide his delight with the result after coming through intense battles with Ducati’s Andrea Dovizioso, Yamaha’s Jorge Lorenzo and Britain’s Cal Crutchlow. He admitted the victory came as a surprise with the Le Mans circuit and wet conditions not amongst his most favoured.

Pedrosa told MotoGP: “It has been a great race for me because I didn’t expect it. I always have problems here, with the temperature, the tyres are cold for me and I never get good grip. Last year I struggled a lot in the same race conditions but today I got some good grip on the tyres, especially in the front, so my braking was good.

“I’m so happy with this one because I lost some position sliding at the start but recovered at the first turn. I had no grip on the rear, but tried to stay in front with Dovvy (Andrea Dovizioso) and Lorenzo. I started to have some good feeling in the wet, so I tried to push but made a couple of mistakes and almost went off twice.

“I was able to hang on and just keep up the rhythm, so I could escape out in front and ride with good pace. The bike was working well; the tyres were spinning a lot with the drying line in the last laps, but I was able to manage the gap and bring home this victory which is so special.”

Pedrosa will be aiming to preserve his championship lead when MotoGP heads to Italy’s Mugello Circuit on June 2.