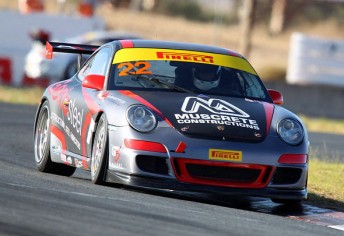 Richard Muscat will compete in five races in two different Porsche categories at the monster Rennsport meeting at Sydney Motorsport Park this weekend.

The young racer will have almost three hours of racing on Sunday at the headline meeting which will feature the Carrera Cup and the GT3 Cup Challenge.

Muscat’s mentor and team-mate John Morriss is keen for the driver to have the opportunity to do more Carrera Cup racing.

“This weekend we wanted to realise Richard’s potential, and by doing so, hopefully attract the backing needed to pursue racing more in Carrera Cup for not only the remainder of this year, but ongoing from there,” said mentor and GT3 Cup Challenge team-mate Morriss.

“Our original plan was to have Richard classified as the ‘Elite’ driver for his Carrera Cup debut and team up with (2012 GT3 Challenge Cup Champion) Kane Rose,” Morriss said.

“But now those plans are shelved, for the Porsche racing organisers have deemed Richard as a ‘Professional’.”

The Rennsport meeting features unique shared driver racers along the lines of a pro-am format with Porsche classifying amateurs as ‘elite’ drivers.

With that ruling the team has enlisted sports car journeyman Simon Middleton to slot in as the Elite driver, sharing their GT3 Factory/Wrap My Ride-backed, Gulf-inspired liveried 2011 Porsche 997 in the two one-hour Pro-Am Endurance races.

The car was used by Mark Skaife at the AGP last year and will be run by Steven Richards Motorsport.

Richards is a front runner in the category and will also assist and guide Muscat throughout the weekend.

Middleton has raced Porsches in Carrera Cup and Australian GT Championship successfully since 2005, switching to a Lamborghini Gallardo in 2010.

Most recently he finished 10th in this year’s Bathurst 12 Hour, sharing an Audi R8 LMS Ultra GT with Dean Koutsoumidis, Andrew McInnes and Darryl O’Young who won that event in 2012.

In his debut in that series last month, Muscat qualified fastest at Mallala Motorsport Park with a new benchmark time, at his first time at the South Australian circuit.