The AGT will headline the third round of the Shannons Nationals with twin one-hour races and will run in conjunction with the inaugural running of the Great Southern Four Hour for the Australian Manufacturers Championship.

There are also rounds on the undercard for the Radical Australia Cup, Swift Racing Series and PRB Clubmans.

“It takes a cool head to get into these cars and be quick but after 30-laps he was right on lap record pace and he didn’t put a foot wrong,” Ryan said.

Le Brocq is excited at the chance of handling the SLS a bit sooner than he had anticipated.

“At the start of the year I didn’t expect to have my backside in what is one of the best GT cars in the world,” Le Brocq said. 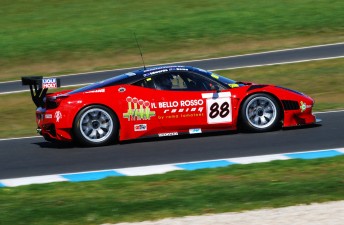 “When I started with the Erebus Academy it was in the back of my mind but I thought maybe at the end of the year or perhaps next year.

“It (SLS) was pretty much what I expected. The car has a lot of straight line speed and good aero grip, obviously not as good as the Formula 3 car but still very good.”

Defending GT champion Klark Quinn heads the points having won the opening round held in conjunction with the Bathurst 12 Hour earlier this year followed by a podium finish at the Clipsal round in Adelaide.

Meanwhile the Ferrari Maranello Motorsport outfit have finished upgrades to their 458 GT3 which they feel will boost the chances of John Bowe and Peter Edwards.

Queensland’s Roger Lago is another who will be pressing hard in his Lamborghini.

There are several co-driver entries for the pair of one-hour races with Jack Perkins sharing a Ginetta G50 with Mark Griffin and Steven McLaughlan booked for his national debut in the ex-Greg Crick Dodge Viper which won at Phillip Island a year ago.

Practice for the round starts on Friday ahead of qualifying and the opening races on Saturday.