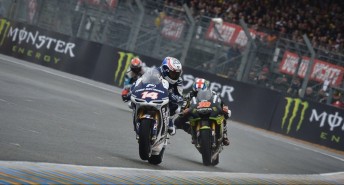 Randy De Puniet will travel to Japan this week to test Suzuki’s much anticipated 2014 MotoGP challenger.

The experienced French rider, who retired from his home Grand Prix at Le Mans, is due to test the machine at the famous Motegi circuit as part of his official test rider duties with the Japanese firm.

Suzuki withdrew from MotoGP at the end of 2011 citing the current economic crisis as one of the reasons for its departure.

The impending return in 2014 has been the talk of the paddock with Suzuki confirming its all new 2014 machine will test against Ducati, Honda and Yamaha in at least three sessions in Europe this year.

“Yeah we leave tomorrow to Japan to test with Suzuki in Motegi, and it’s good for me because I will forget very quickly the race on Sunday and I think it will be good for Mugello,” he told the official MotoGP website.

“I will be ready to be fast immediately. That is a good experience for me how to do a great job and I really hope to come back to Mugello for a good race.”