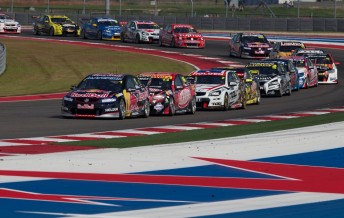 Moves to add a second North American event to the V8 Supercars schedule will be welcomed by the Circuit of the Americas as the venue pushes to develop the Austin 400.

The COTA hosted V8 Supercars’ first foray into the world’s biggest consumer market at the weekend, attracting an announced attendance of 69,000.

Unlike recent international V8 Supercars events in Bahrain and Abu Dhabi that were built on public money as drivers of tourism, the Austin 400 will rely on ticket revenue – and the success-linked local event fund – for survival.

The weekend’s crowd is said to have included Americans from 30 different states, while nine percent of the total patrons travelled from Australia.

Having reportedly paid in the region of $6.5 million to host the series this year, twinning the Austin event with another in North America looms as an attractive option for the circuit as it aims to ensure sustainability over its current five-year term and beyond.

“When there are sports in America that are in various markets that raises the tide for everyone,” said COTA president Steve Sexton, admitting that the circuit has “had discussions” about twinning with another venue.

“It’s really V8 Supercars’ decision whether to go and pursue other circuits and reach out in North America, but I can tell you we share the vision of raising that tide and getting V8 Supercars more exposure in the country,” he added.

V8 Supercars’ director of international business, Adam Firth, has remained in America following the weekend, where it is understood that he’ll be meeting with a selection of potential promoters for further races.

The COTA’s contract with V8 Supercars does prevent the category from racing within a designated radius of Austin, Texas, although just how far reaching the limit extends is unclear.

Stressing that unseasonably hot weather – Saturday was the hottest May 18 ever recorded in Austin – hurt the weekend’s attendance, Sexton says that it will take time to boost the profile of V8 Supercars in the ‘Texas triangle’, which boasts 20 million potential fans.

Creating entertainment beyond the on-track action for the Austin 400, he says, will be an important factor in its growth.

“From the entertainment perspective we can do a lot more,” he said after the circuit’s plans to attract a music act for the weekend failed to come to fruition.

“People who follow the V8s are the core audience, but the casual fan in Texas that will come out for big events appreciate a large scale entertainment experience.”

Despite concerns that clashing with qualifying weekend for the Indianapolis 500 and the NASCAR All-Star race in Charlotte, North Carolina, was also damaging, a May date is again expected for 2014.

“I think the May time is good… you’ve typically got students still in session (and) the competition in the (sports) market place is minimal,” he said.

“The Spring is a good slot, we just got an unfortunate break on the heat this weekend.”

Having pushed hard to have local content in the 2013 event, specifically in the form of big name American drivers, Sexton underlined the COTA’s continued desire for domestic involvement.

“To the degree that we can Americanise our race series and get American drivers involved and create that kind of a following, of course (we would),” he said. “That helps sell tickets.”