Whincup back on top in Austin 400 finale

Whincup back on top in Austin 400 finale 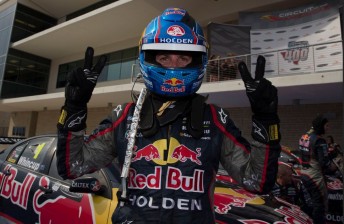 Jamie Whincup finished off a strong weekend for Red Bull Racing Australia in Austin, Texas, by returning to the top of the podium in the fourth and final 100km sprint.

Having finished third in Race 15 earlier in the afternoon, Whincup led away from pole in Race 16 and was unstoppable for the duration.

Race 15 winner Fabian Coulthard shadowed Whincup for much of the journey but could not find a way around his rival during the critical lap after the Red Bull Holden’s pitstop.

Starting from just 12th after a difficult qualifying session, Lowndes gained much of his ground in the pitstop cycle.

Bright repeated his Saturday strategy of running longer than many of his rivals. The Team BOC Holden had taken on four new tyres and rejoined in a net 10th with seven laps to go before getting the better of Webb and Kelly in the closing stages.

The race was punctuated by an early Safety Car following contact between Will Davison and Scott McLaughlin at Turn 12.

The FPR Falcon driver had lost control while attempting to pass Lowndes, subsequently clobbering McLaughlin at the apex.

The Austin 400 was run in front of a claimed 68,000 strong weekend crowd; over double that achieved for the recently two-day Grand-Am sportscar event at the Circuit of the Americas.

Whincup has now extended his championship lead over team-mate Lowndes to 142 points after 16 races.

See below for the full Race 16 result