Result under question as sun sets in Austin

Result under question as sun sets in Austin 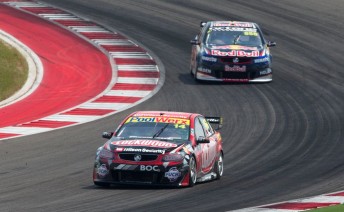 Coulthard led Lowndes to the line in Race 15

Fabian Coulthard’s victory in Race 15 of the V8 Supercars Championship at the Circuit of the Americas remains in doubt as the teams pack up their equipment to head back to Australia.

Despite official results having been released showing Coulthard’s victory over Craig Lowndes and Jamie Whincup, an investigation into a Lap 16 Safety Car restart continues.

A V8 Supercars spokesman confirmed to Speedcafe.com this evening that the top three are all being looked at for breaching the Safety Car restart regulations.

Coulthard appeared to accelerate too early as the Safety Car departed the circuit – effectively dragging Lowndes and Whincup with him.

After going on to finish second in the final hit-out of the weekend, Race 16, on Sunday afternoon, Coulthard explained that he had been the victim of communication issues.

“I heard on the radio that it was ‘green flag go go go’ and then it was a ‘no no no’,” he explained.

“I did the best I could to… I admit I did accelerate away but I tried to make it so I didn’t get an unfair advantage as the green flag was called.

“It was a radio communications program within our team. We’ve had to change radio frequencies a couple of times throughout the weekend because there’s two people on my channel.

“That made it a bit difficult and was a contributing factor.”

The Austin 400 marked V8 Supercars’ first visit to North America and was run in front of a claimed 68,000 strong weekend crowd.