Pedrosa powers to victory at a slippery Le Mans

Pedrosa powers to victory at a slippery Le Mans 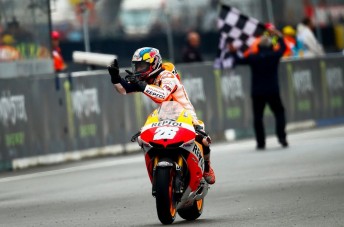 Dani Pedrosa secured his second MotoGP win of the season as he tamed wet conditions to win the French Grand Prix at Le Mans.

The Honda rider produced a memorable ride coming from behind on several occasions before gapping the field to complete a comfortable victory and claim the championship lead.

Britain’s Cal Crutchlow followed Pedrosa home to collect his best MotoGP result to date in second. The effort was made even more heroic with the Tech 1 Yamaha rider competing with a fractured tibia.

The Repsol Honda team completed the podium with poleman Marc Marquez salvaging a third place finish, coming from well back after a poor start.

Heavy rain before the race made track conditions extremely slippery and wet tyres were the order of the day for the MotoGP field.

It was Ducati’s Andrea Dovizioso who reacted best to the lights and to the conditions as he stormed into the lead at the first corner. He was followed by Jorge Lorenzo, while polesitter Marquez slumped to ninth. Pedrosa held third ahead of Stefan Bradl, Valentino Rossi, Nicky Hayden and Crutchlow.

Despite difficult conditions, the leading group began to make moves with Yamaha’s Rossi sliding into fourth on lap two and Pedrosa passed Lorenzo for second a lap later.

Dovizioso tried to build a lead early on but was unable to pull away from Pedrosa and Lorenzo, which allowed Rossi to latch onto the lead trio. It wasn’t long before the Honda man grabbed the lead on the back straight and set about building an advantage.

But Pedrosa was unable to relax as the lead group soon turned into a six rider battle for the victory with Crutchlow and Hayden joining the party. The lead changed hands shortly after as the Spaniard ran wide allowing Dovizioso back to the head of the field, while Lorenzo suddenly slowed and dropped to sixth.

Pedrosa soon recovered the lead only to lose it again with another mistake. However, he redeemed himself by repassing Dovizioso. Further back a recovering Marquez began closing in on Lorenzo and the lead group. Crutchlow threw his hat into the ring as he stormed into third by overtaking Rossi.

Matters took a turn for the worse for the multiple world champion as he dropped the Yamaha and endured a slide through the gravel trap before he rejoined the fray and soldiered on to finish 12th.

Meanwhile at the front Pedrosa began to open up a healthy lead but there was plenty action behind as a mistake from Dovizioso was punished by Crutchlow. Further back Marquez’s recovery ride continued as he moved passed Hayden and Alvaro Bautista for fourth before eventually passing Dovizioso for the final podium spot.

Dovizioso hung on for fourth ahead of Ducati team mate Hayden, Bautista, Lorenzo, Michele Pirro, Bradley Smith and Bradl, who completed the top 10.

Local rider Randy Du Puniet was unable to bring the huge partisan crowd any joy as he retired with 13 laps remaining. Australia’s Bryan Staring had a race to forget retiring in the opening minutes.

MotoGP heads to Italy’s Mugello Circuit for round five of the championship on June 2.