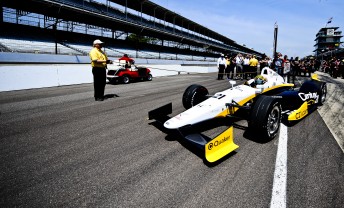 Katherine Legge has squeezed into the final position of the Indy 500 after Michel Jourdain jr was punted from the field on Bump Day.

Driving the #81 Angie’s List Schmidt Peterson Pelfrey Honda, Legge finished with an average of 223.176mph. She had not taken part in the week-long practice sessions leading up to her 11th hour quest at Indy on qualifying and Bump Day.

The Rahal Letterman Lanigan team finally aborted the effort to qualify Jourdain jr with 20 minutes remaining in the run with the driver complaining of serious balance issues.

RLL will now be served in the Indy 500 by its main drivers Graham Rahal and James Jakes.

Legge said she felt gutted for Jourdain jr but was glad to have made the field after such a limited preparation.

The 1996 Indy 500 winner Buddy Lazier also made the field in a family-run car.

Josef Newgarden led the second day runners who were out to cement grid spots and will start from 25th in his Sarah Fisher Hartman Racing Honda after averaging 225.731mph.

The final week building up to the 97th running of the Indy 500 will see one more 60-minute practice session on Friday on Carb Day ahead of Sunday’s 200-lap race.