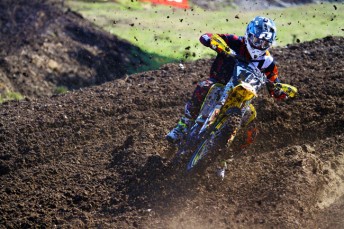 Matt Moss has closed Todd Waters’ Monster MX Nationals MX1 Championship lead to 27 points after a stellar day at Broadford, taking the round win and bonus points from the GoPro SuperPole.

Moss took the first moto aboard his Motul Pirelli Suzuki mount and then finished second in the final race of the day. Waters came into the event under an injury cloud after suffering a concussion last weekend in a non-Championship event in Queensland. He would salvage fifth overall for the weekend – it was the end of his domination that saw him take the first three rounds aboard his KTM machine. Waters finished second and eighth in the two races.

“I’m stoked to get the win and to close the points up on Todd,” explained Moss – who returned to MX1 this year. “Today was the first fault for him and hopefully there’s many more to come, but he’s a true champion and he’ll bounce back. We’re getting the wins now and we’ll chase after him.”

Billy Mackenzie aboard the CDR Yamaha had one of his best runs of the season, getting himself onto the podium at the track where he scored his first ever international Grand Prix point. The Scotsman won the second moto after finishing the first in third position after a small spill.

Completing the podium was Motorex KTM’s Kirk Gibbs – his first ever career podium. He finished his two races in fourth and sixth respectively but kept KTM’s consistent podium run up with the four points for ending SuperPole in second placing. Serco Yamaha’s Luke Styke took his third win of the season in MX2 despite tying on points with Josh Cachia – the pair sharing the moto wins and second placings – Styke being granted the round win by his second race victory. This took his points lead to 30.

“I was after the win, it was the only option in that last race and I had a point to prove,” Styke reflected. “I can’t thank Serco Yamaha enough, I’m on the best bike in the class. Thank you to everyone who’s supporting me.”

Luke Clout finalised the podium on the other Serco Yamaha, keeping his consistency alive throughout the 2013 season.

In the Pirelli MXD Development category for under-19 racers, Queenslander Joel Dinsdale has emerged as a Championship threat, taking his third straight race win for GYTR Yamaha and advancing to fourth on the points standings, 25 off the overall lead.

Kiwi Hamish Harwood shot to the Championship lead with a pair of second placings, Kawasaki’s Jesse Dobson completed the podium. Meantime a crash and finger injury hampered the progression of former Series leader, Jack Simpson. He was ruled out of moto one by officials before charging back for a third place in moto two. He would finish 12th overall for the event.

The next event on the Monster Energy MX Nationals tour will see riders take in some much needed sunshine at Conondale on Queensland’s Sunshine Coast on Sunday June 2.

CHAMPIONSHIP POSITIONS (After 4 of 10 rounds):