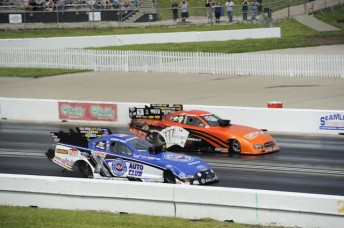 With his third victory of the season and second in succession, Johnny Gray has elevated himself into the points lead of the NHRA Mello Yello Funny Car Series, whilst Jeg Coughlin Jr and Shawn Langdon made their way to victory lane in Pro Stock and Top Fuel respectively.

The Topeka win sees Gray’s Dodge head the NHRA pointscore – the first time in his career that he has been an outright leader. He got home in the final in just over four seconds after Hight hazed the tyres during his run.

“It’s a long way before we start running for the championship, but if the car keeps running like it’s running, then we’ve got as good a shot as anybody out there,” said Gray.

He felt that he had an ‘intimidation factor’ that helped him to victory lane.

“Sometimes you can win races on an intimidation factor, and Rob (Wendland, crew chief) had her tuned up to where she was a little intimidating today. Robert had a great race car, too, but they just missed it a little bit. They have a great team over there. Our car went right on down through there. My guys are giving me a car I can’t screw up in right now.”

To get to the final, Gray got around Alexis DeJoria, Del Worsham and Jack Beckman.

Hight got around Jeff Arend, Bob Tasca III and Ron Capps to advance to the final.

Former Championship leader, Cruz Pedregon was taken out in round one by Jack Beckman, whilst top qualifier, John Force ended his weekend in round two against Beckman on his charge to the semis. Force headed the top three placings by the JFR machines in qualifying. 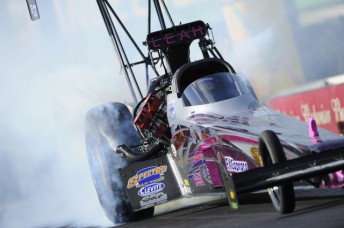 The battle for Top Fuel honours continues to heat up as Shawn Langdon ran down Championship leader, Tony Schumacher to take the win for Al-Anabi Racing – his second of season 2013.

Ironically, all three of Langdon’s career NHRA victories have come against the US Army racer.

“We haven’t quite been able to finish it out on Sunday,” said Langdon. “My crew had the fire in their eyes today. They wanted to close it out. We didn’t want to go four races in a row feeling like we had a car that can win and not getting it done.”

Top qualifier, Langdon got to the final by cutting his way past Pat Dakin, Steve Torrence and Spencer Massey, whilst Schumacher was able to continue his top of the table run by eliminating Bob Vandergriff, Clay Millican and lady racer, Leah Pruett – who had her best ever run in the NHRA Mello Yello Top Fuel Series.

Scoring maximum points from the weekend, Langdon has closed Schumacher’s lead to 34 points.

Australian Dave Grubnic qualified eighth fastest but was eliminated in the first round by Torrence. This was one of the rounds being sat out by Rapisarda Autosport International.

Veteran racer, Jeg Coughlin Jr. took his first win in over two years at Topeka. He beat home team-mate Allen Johnson to take the Wally and his consistency throughout the season sees him positioned second on the points ladder.

Runaway Championship points leader, Mike Edwards, who was the fastest qualifier, was eliminated in the second round by Vincent Nobile, who’s own run was ended in the semi’s by Coughlin. The others to feel the wrath of Coughlin’s bright yellow Jeg’s machine were Greg Stanfield and Ricky Jones.

Johnson got to the final through taking care of Larry Morgan, Greg Anderson and Rodger Brogdon.

In a special day for Coughlin, not only was it his 53rd final round win, he became just the 12th driver in NHRA history to have taken 500 round victories.

“Today was extra special for several reasons. We hadn’t won in a couple of years. To finally get a Wally on Sunday is exactly what the doctor ordered,” said Coughlin. “We have been working  hard and trying to work smart, and today was our day, and it felt fantastic. My family has been behind me all the way, and they are a huge part of getting this 500th round-win as well.”

Edwards points lead is still at 76 despite bowing out early, which is huge so early in the season.

The next round will be one of the real traditional events on the NHRA Mello Yello schedule when the tour arrives at Englishtown for the Toyota Summernationals May 30-June 2.