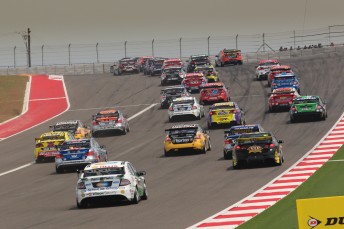 Engel on a collision course with Todd Kelly at Turn 1

Maro Engel and Michael Caruso have both been handed points penalties for careless driving during Race 13 of the V8 Supercars Championship in Austin on Saturday.

Engel has lost 25 championship points for his part in an opening turn incident that saw the SP Tools Mercedes make contact with the back of Todd Kelly’s Nissan, which subsequently turned around the Holden of Scott McLaughlin.

Caruso meanwhile has been relieved of 15 points for tagging Tim Slade into a spin at Turn 14 later in the opening 100km encounter.

Caruso drops behind David Wall to 22nd in the standings with his penalty, while Engel remains the last of those to have competed at every event in 27th.

Stewards deemed that no breach of the rules had been established in 10 other incidents that were investigated after the two Saturday races.

The investigations included a review of Craig Lowndes’ Race 13 pitstop, which showed that the wheels on the Red Bull Racing Australia Holden had not rotated until after it had hit the ground.