Coulthard strikes back for BJR in Race 15

Coulthard strikes back for BJR in Race 15 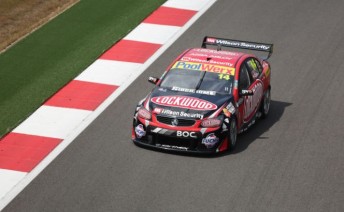 Fabian Coulthard has stopped Red Bull Racing Australia’s five-race streak by taking Race 15 at the Circuit of the Americas.

The win however is currently provisional due to a post-race investigation into whether or not Coulthard maintained an appropriate speed prior to the restart.

Jamie Whincup led the opening laps from pole but soon fell behind Mark Winterbottom, Coulthard and Lowndes as he struggled with his Holden.

After overtaking Whincup, Winterbottom led until pitting when the window opened on Lap 11, where he lost considerable time with yet another slow tyre change from Ford Performance Racing.

Winterbottom was seventh by the time the pitstop cycle shook out and could make no headway from there, his pace hindered by being forced to run a left-over tyre from Race 1 on the troublesome left-rear.

Jonathon Webb finished fourth after capatilising on a slow restart from Rick Kelly to take both the Nissan and Garth Tander’s Holden in one move.

Tander eventually finished behind Webb and the second Tekno Holden of Shane van Gisbergen, who showed impressive pace in the closing stages.

Will Davison could manage just 12th in his Pepsi Max FPR Falcon and has now lost second place in the points standings to Lowndes.

The fourth and final 100km race of the weekend his set to kick-off at 1700 local time.

See below for the full Race 15 result