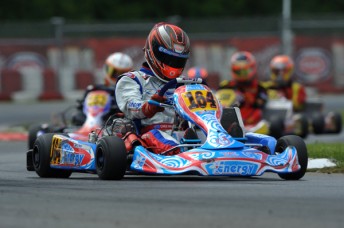 Queenslander Chris Hays in action at Round One of the CIK-FIA European KZ2 Championships in Germany (Pic: KSP)

Australian Chris Hays made the Europeans sit up and take notice when he consistently ran inside the top ten during his European debut at the Wackersdorf circuit in Germany across the weekend.

Hays and fellow Queenslander Jason Faint lined up with the Energy Corse team, the outfit that also runs the Lotus F1 Junior Team, for the opening round of the CIK-FIA European KZ2 Championship.

The reigning Castrol EDGE CIK Stars of Karting Series Champion ran inside the top ten throughout his qualifying heats before finishing ninth in his pre-final to secure 18th place on the grid for the final.

Despite being involved in an opening lap fracas, dropping him to 26th, Hays fought back to record lap times as quick as the leaders of the race to charge his way back up the order to greet the chequered flag in 15th. Unfortunately, a post-race penalty of 10 seconds for contact with another competitor saw him classified 23rd in the final standings.

“Over here (in Europe) it is a different world in go-karting, it is a massive field of young drivers who are up and coming and always trying to make their mark. To be able to show that Australian drivers can mix it with the best from all over the world is great,” said Hays.

“During the heat races, I was continually learning and coming to grips with everything but still managing some strong top ten results, which was very encouraging.

“After making it into the final, the main aim was to get to the finish. I got shuffled back at the start and there was really nowhere to go because I was stuck in the middle of the pack. There were karts going everywhere.

“Once it all sorted itself out, I got into a rhythm and worked my way back up the order. I had some really quick pace in the kart and was able to match the times of the leaders.

“I learnt so much over here this weekend, I definitely improved my driving even more and really can’t wait to come back to Belgium for round two at the end of next month.” 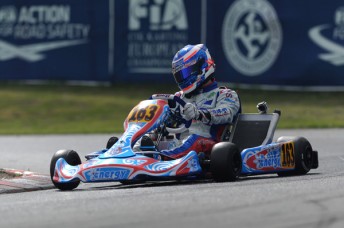 Jason Faint was pleased with his progress against the world’s best. (Pic: KSP)

While a spin on the opening lap of his pre-final may have ended Faint’s run at the event, the Gladstone driver was pleased with his progress against the world’s best.

“It is very hard to finish races here with karts going in all directions at times, it is pretty cut throat – especially when you don’t qualify up the front,” said Faint.

“From where I qualified (71st) to where I was up to in the pre-final, it leaves me with a fair bit of mixed emotions. At the start of the pre-final, I came from 33rd on the grid to be running just outside the top 20 on the opening lap.

“I then went for a move on turn five and got spun around. The impact left me with a bent axle, I managed to restart and cross the line 31st.

“Overall, I think I’ve learnt more this weekend than any other race that I’ve competed in. A huge thanks must go to the Energy Corse team, both here in Europe and back home in Australia.”

German driver Riccardo Negro won the event ahead of Italian Marco Zanchetta and Swedish driver Joel Johansson.  In the professional KZ category it was Max Verstappen who was victorious ahead of Bas Lammers and Marco Ardigo.

The next round of the CIK-FIA European KZ2 Championships will be held at the Genk circuit in Belgium on June 27-30. Prior to this event both Hays and Faint will contest round three of the Castrol EDGE CIK Stars of Karting Series at Geelong, Victoria on June 15/16.