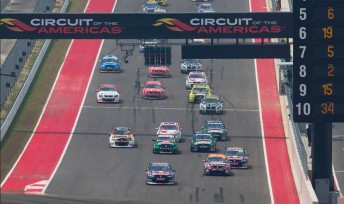 Whincup won the start and did not look back from there

Jamie Whincup has continued his strong international V8 Supercars record by scoring victory in the first championship race to be held at the Circuit of the Americas in Austin, Texas.

Whincup took the lead from pole-sitter Fabian Coulthard off the start, pulling a 2.5s lead on the field before pitting for rear tyres as soon as the window opened on Lap 10.

Lowndes took seven laps to pass Coulthard, who struggled for rear-grip in the early stages, and ran five laps longer than Whincup before taking new rear tyres of his own.

Rejoining just 0.5s behind Whincup, Lowndes struggled to find a balance in the second stint, eventually taking the flag 0.9s adrift in second.

Coulthard was eight seconds behind Lowndes in third at the flag ahead of Will Davison, Garth Tander, Rick Kelly, Jonathon Webb, Mark Winterbottom, James Courtney and David Wall.

Kelly’s sixth place finish is the best for a Nissan Altima and came after the 2006 champion got the better of Webb on the final lap.

Winterbottom meanwhile had lost two positions with a big lock-up at Turn 1 while trying to pass Tander late in the going.

The Safety Car was soon called for an incident later in the lap that had seen Maro Engel spear off and rejoin without major damage.

Lee Holdsworth and Shane van Gisbergen struck mechanical issues in the form of steering and engine problems respectively. Both cars were able to see the chequered flag, with Van Gisbergen’s issue as simple as re-attaching a plug lead.

The Kiwi had started from the rear of the field after an indiscretion in qualifying.

A post-race investigation was undertaken into a report that Lowndes had spun his rear wheels in his pitstop, however it was deemed that the three-time champion had no case to answer.

Lowndes had also been one of several to receive a bad sportsmanship flag for failing to give racing room during the race.

The results ensure that Whincup has extended his championship advantage to 80 points over second placed Will Davison.