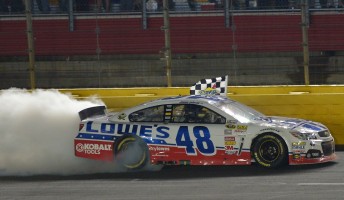 Not even a rain delay and the best drivers in NASCAR could stop Jimmie Johnson from becoming the only four-time winner of the Sprint All-Star race in Charlotte.

The non-championship race features only race winners from the previous season, other All-Star champions plus two entries from the Sprint Showdown which ran earlier in the night and a fan vote entry.

The All-Star race itself is broken down into short sprint segments and even a final 10-lap dash after a final round of compulsory pit stops.

Johnson finished 15th, fifth, third and third in the first four segments, but made his move in the final run to the chequered flag to take US$1 million prize.

“To beat Jeff and Earnhardt, two guys I’ve looked up to my whole life — two massive icons of our sport — this means the world to me,” said Johnson, who started 18th after sliding through his pit box and drawing a penalty for a loose lug nut during Friday’s qualifying session.

“I really didn’t think we had a shot at winning tonight, starting (18th), but we had a great race car and worked our way through there and got the job done. Over time, honestly, it’s just dedication and drive from every member at Hendrick Motorsports, every member on this No. 48 team. We’re very proud of what we’ve accomplished, but we know we’ve got to keep pushing harder and pushing one another.”

Johnson broke a tie with Jeff Gordon and Dale Earnhardt for the most all-star race wins.

VIDEO: Here is the end of the race