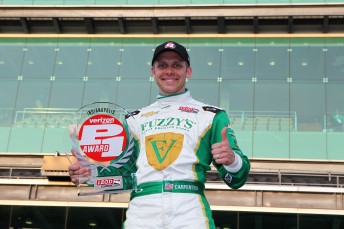 Ed Carpenter on pole for the Indy 500

Team owner-driver Ed Carpenter has taken the pole position for the Indianapolis 500 after upstaging the biggest outfits in IndyCar racing.

The local hero Carpenter turned a four-lap qualifying average in the fast nine in 228.762mph in a session which was delayed for several hours because of rain.

In another fairytale, the unheralded 21-year-old Carlos Munoz has gained a front-row berth after turning 228.342mph to be second quickest with Marco Andretti completing the front in 228.261mph.

The gravity of Carpenter’s effort was one of the biggest qualifying upsets in 500 history as he toppled the Andretti Autosport powerhouses which had five runners in the fast nine and the 15-times winning Indy 500 Team Penske operation.

“I just can’t thank the team enough. To be a single car team in this shootout and to be fighting the Penske and Andretti guys is great,” Carpenter said with a degree of humility. For his efforts Carpenter wins $100,000 for cracking pole and 15 bonus points in the IndyCar series.

Perhaps the most animated of the fast nine runners was Munoz who left nothing on the track, fighting for control and leaving the smallest of spaces between the right-side of his Chevy and the wall.

“It was an awesome run again. The car was really good and I have a big thank you to the team. To be 21 years old on the front row with these guys its unbelievable.”

Penske driver Will Power was the final car to go out in the shootout and turned a blistering 229.119 mph but in his final couple of laps the Aussie could not sustain the pace and averaged  228.087mph and will start from sixth.

Katherine Legge has become the 34th car to try to make the 33-car grid on bump day tomorrow. The Briton will drive the Sam Schmidt #81.

Positions 25-33 to be determined on Bump Day tomorrow