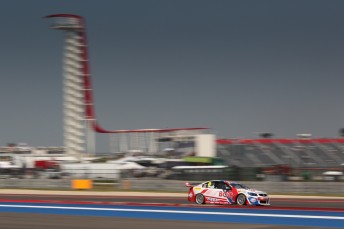 V8 Supercars Championship contender Jason Bright will need to turn around one of the most frustrating weekends of his career if he is to be a contender in the final races of the Austin 400 on Sunday.

Even copying the car set-up of team-mate Fabian Coulthard, who scored pole and a third place grid position for the respective races, failed to save Bright in the races.

“We’re struggling with the car, it’s certainly not what it has been all year,” he told Speedcafe.com after taking the chequered flag 12th in Race 13 and 21st in Race 14.

“Obviously cars #14 (Coulthard) and #21 (David Wall) were up there in qualifying and I just can’t get a qualifying lap out of it.

“In the first race our pace wasn’t too bad and then we put a set of rears on it at the end and did a lap record. But it was only at that point did I have any confidence in the rear of the car at all.

“We tried switching to their (Coulthard’s) set-up completely but it didn’t really fix any of the issues we’ve got, I was still getting the same feeling out of the car.

“We’ll have a good look through everything tonight and then try something different for tomorrow.”

The lowly starting positions triggered an alternate strategy for the two races, with Bright joining Michael Caruso and Scott Pye in waiting until the dying laps to pit in each race.

While the strategy was designed to ensure Bright could run in clean air and gain positions, it ensures the 1998 Bathurst 1000 winner has been left with a strong tyre bank for Sunday’s final two 100km races.

Now 256 points adrift of Jamie Whincup in the points standings after four straight wins for the four-time champion, Bright says he is not concerned that Red Bull Racing Australia’s recent form is an ominous sign for his title hopes.

“I think this track is the only one where we haven’t had the pace,” he said.

“Fabs qualified well (on Saturday) but his race pace isn’t matching theirs like we normally would.

“I’d say they (Red Bull) have got a jump on everyone here but I didn’t think in Perth there was that big a jump that people were making a big deal about.”

Fourth placed Bright is just 12 points ahead of Coulthard in the championship standings after 14 races.