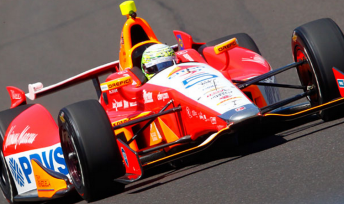 Rain has brought an early end to the seventh day of practice in the build up to the 97th running of the Indianapolis 500.

As teams trimmed out their cars ahead of pole day qualifications the session was cancelled with just over two hours left to run.

The familiar sight of an Andretti Autosport car topping the times continued before the cancellation with EJ Viso cracking a 229.537mph lap in the #5 Chev-powered Dallara.

The noticeable absentee was second generation racer Conor Daly who made heavy contact with the turn one wall on day 6 practice.

The schedule allows of another two-hour practice session ahead of the qualifications.