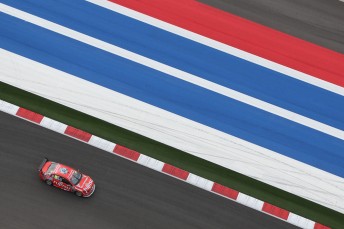 Fujitsu Racing GRM’s Scott McLaughlin emerged as the fastest man from an unusual opening morning of running at the Circuit of the Americas.

With just seven sets of tyres allocated for the weekend and no pre-marked rubber available at international events, drivers spent much of the morning learning the dry track on wets.

A 1:34.39s slick tyre effort from Fabian Coulthard proved enough to be quickest in Practice 1 ahead of James Moffat, Shane van Gisbergen, Jason Bright and Will Davison.

McLaughlin, who was one of several not to run slicks at all in the opening session, was the only man to lap faster than Coulthard’s benchmark in Practice 2 – eclipsing the marker by 0.17s. In addition to the tyre situation, the competitive order was further muddled by a lack of policing of the track limits.

Practice 1 had been book-ended by red flags; the first was called after David Wall’s Holden stopped on its out-la with an oil pressure sensor issue.

The 30 minutes eventually elapsed under a second red flag, this time to retrieve Jonathon Webb’s Holden, which lost an oil line in spectacular fashion on the main straight. Both cars returned to the track for the second session.

Webb earlier had minor contact with James Moffat as the duo squabbled over track position – leaving a witness mark on the front-right corner of the Norton Nissan.

Two further practice sessions will compete the Friday action for the V8 Supercars in Austin.