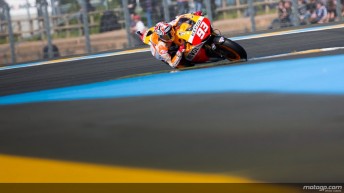 Honda’s Marc Marquez continues to impress in his debut MotoGP season after securing pole position for the French Grand Prix at Le Mans.

The Spaniard, who leads the championship, suffered a fall in free practice but it did little to dent his confidence, as he stormed to pole position in overcast conditions. Rival Jorge Lorenzo pushed hard and was just a hundredth of a second shy in second for Yamaha while a stunning effort late on from Andrea Dovizioso secured Ducati a spot on the front row in third.

The 15-minute session began with Lorenzo setting the initial pace from Tech 1 Yamaha’s Cal Cruthlow, who made a strong start posting a time good enough for a provisional second spot. Honda’s Dani Pedrosa soon eclipsed the Brit but his session was then interrupted by a fall at turn one. He rushed back to the pits to grab the second bike and rejoined the fray.

Marquez held fourth spot during the early stages before he lit up the timing screens with eight minutes remaining, posting a 1:33.187s lap to grab provisional pole.

Further down the grid the action was just as entertaining with Bradley Smith moving into eighth position and Stefan Bradl slotting into fourth.

As time ticked towards the chequered flag, Lorenzo regrouped and he set a time just a hundredth adrift of Marquez and continued to push. Despite putting everything on the line, he couldn’t deny Marquez from taking his second pole position of the season.

However, arguably the performance of the session came from Dovizioso as he managed to squeeze everything out of his Ducati to secure third place at the chequered flag.

Crutchlow grabbed fourth late on with a time just a couple of hundredths ahead of Bradl and the recovering Pedrosa. Alvaro Bautista will start from seventh ahead of a quiet Valentino Rossi with Smith ninth fastest in front of Ducati’s Nicky Hayden.

Alex Espargaro and local rider Randy De Puniet were 11th and 12th respectively after progressing from qualifying one.

Australia’s Bryan Staring will line up in 21st position on the Honda Gresini CRT machine.