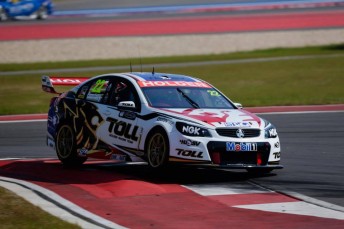 Corvette Racing ALMS driver Oliver Gavin has lent a hand to the Holden Racing Team’s assault on the Austin 400 in a relationship that could flourish into an endurance drive with the factory Holden squad.

The 40-year-old Briton was last seen in a V8 Supercars paddock on the Gold Coast in 2011 where he piloted a Kelly Racing Holden alongside the now HRT endurance driver Greg Murphy. His hit-out at Kelly Racing was orchestrated by Tony Dowe, who now holds the position of racing director at the HRT.

Gavin experienced the Circuit of the Americas first-hand at a Corvette Racing test in December, 2012, and returned to the venue for the V8 Supercars on his way home from a mid-week seat fitting with Corvette in Detroit.

Participating in the HRT’s pre-event track walk, Gavin was also able to source onboard video from Cadillac Racing’s Pirelli World Challenge GT support series entries’ Thursday test running for the HRT’s use; giving the squad a preview of the increased kerbing introduced at the venue especially for this weekend’s event.

Gavin then sat in on the team’s debriefs across the opening day of V8 Supercars running on Friday.

“I’ve been here to help the team and find any areas where I can give them a steer here or there in the right direction,” he told Speedcafe.com ahead of a scheduled trip home on Saturday morning. 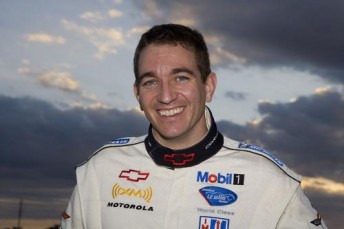 “I’ve had some experience (in V8 Supercars) with Kelly Racing, so it’s very, very interesting to see how this team works and compare it to that, as well as what I’m used to with how Corvette Racing operates.

“This is a hugely competitive series and you’re just looking at the tiniest little things to get you up the front, which these boys (HRT) are working night and day on to find.

“Certainly coming to a new track like this there are a lot of things to figure out.”

The Walkinshaw Racing stable is understood to have two of its three drivers sorted for the endurance events, with Murphy expected to pair with Garth Tander and Ryan Briscoe currently being tipped to line-up alongside Russell Ingall.

Gavin says that he’d like to join the team for the Sandown, Bathurst and Gold Coast races this year; none of which clash directly with ALMS events.

“It’s something that we’ll have to see down the road,” he said of an endurance drive.

“I’d like to do it, but we’ve got to see if the opportunity comes along and if it can possibly work.

“Really the reason for coming here was simply to help the guys out with the track and with some of the uniqueness of this place.”

Dowe meanwhile played down the possibility of signing Gavin for this year, telling Speedcafe.com that a decision on the team’s full endurance squad will not be made until the lead-up to the first co-driver practice session of the year at Townsville in July.

“We don’t have a short list of people yet and when we get close to Townsville we’ll look at what we’ll do for additional endurance drivers,” he said.

HRT drivers Garth Tander and James Courtney were third and sixth fastest respectively at the end of Friday practice.