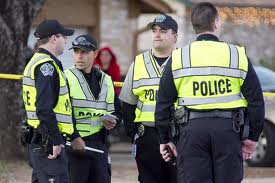 V8 Supercar team members have been warned to be on their best behaviour after two key crew personnel spent a night in the lock up.

Notorious for its tough law, police have wasted no time in practicing what the Lone Star state preaches as the V8 Supercars series has hit Austin in the lead up to the meeting at the Circuit of the Americas.

Mark Dutton, the engineer behind four-times series champion Jamie Whincup, was arrested for jaywalking in the city and spent time at the Travis County Jail.

Brad Jones Racing mechanic Adam Fisher was arrested and charged for resisting arrest and public intoxication after a night out in the city’s clubs and bars hotspot.

Dutton was released however Fisher remained in custody as the charge of resisting arrest was considered a serious offence.

After an initial hearing it is understood that the magistrate had set bail at $5000.

Teams have been advised to strictly adhere to local law in the wake of the arrests.