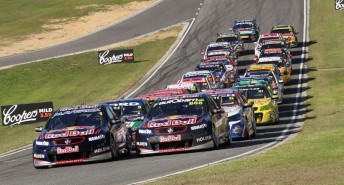 V8 Supercars commission chairman Mark Skaife is bullish on the possibility of seeing more manufacturers in the championship next season, hinting that a fifth player could be revealed towards the end of 2013.

Speaking at a Nissan Motorsport media event in Texas ahead of this weekend’s Austin 400, Skaife emphasised the importance of linking races in international markets with the arrival of new manufacturers into the championship.

“Global recognition for the brand is important particularly as we seek other manufacturers to join V8 Supercar racing,” he said.

“If you think about, for instance, if we have a Korean manufacturer it would make sense to have a race in Korea.”

Korean manufacturers Hyundai and Kia have repeatedly been linked to V8 Supercars since the Car of the Future rule package was announced in March, 2010, while American giant Chrysler also continues to be mooted as a possibility.

Skaife confirmed that V8 Supercars is currently engaged with two manufacturers, hinting that a deal could be confirmed in the coming months.

“With Nissan coming on board and Mercedes-AMG being involved we’re certainly seeking another one or two high profile manufacturers and, only time will tell, I think we’ll make some really important announcements on that as the year closes out,” he said.

“The level of interest with new manufacturers has been great. It bodes well for what is a pretty good litmus test for car companies looking at what’s gone on.

V8 Supercars’ engine regulations are undoubtedly the biggest hurdle for new manufacturers, with both Nissan and Mercedes-AMG currently struggling to match the performance of the incumbent Ford and Holden powerplants with their four-valve, double-over-head-cam units.

Although Chrysler, through its Dodge sister brand, has the basis of a V8 Supercar motor available to it through its recently defunct NASCAR program, the two Korean brands would face a similar task to Nissan and AMG of getting a road car based unit up to speed.

Asked if he was concerned that new players are being put off by the regulations and whether any of the key parameters are negotiable, Skaife said he has full confidence that the Nissan VK56DE and M159 can match the pace after more development time.

“I know that Mercedes/HWA and Nissan understand how difficult it is to meet the performance requirements of the engine the way the rules are configured,” he said.

“(But) that’s not going to be any shock to any new player because the experience is now there.

“In fifteen years the old engines have got to a very mature learning curve and development path, so it’s not going to be easy for new car companies to meet that requirement, but car companies don’t go into those things with their eyes closed.”

Skaife also spoke positively on Ford’s future in V8 Supercars, despite the company having yet to commit to renewing its current deal with Ford Performance Racing, which concludes at the end of the season.

“I see no reason based on the costs to be involved and the exposure they get why they wouldn’t continue to be involved,” he said of Ford.

“From the sport’s standpoint we’d be mad if we didn’t do everything we can possibly do to assist them,” he added.

As of 2013, just six Fords compete in the V8 Supercars Championship against 15 Holdens, four Nissans and three Mercedes-Benz AMGs.