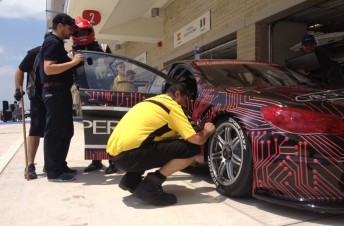 Cameron McConville took to the wheel of V8 Supercars’ Car of the Future prototype Holden on Thursday to evaluate Dunlop’s soft tyre at the Circuit of the Americas.

V8 Supercars had originally slated the Austin 400 as a mixed tyre event before moving to an all-hard tyre format as a precaution for the category’s debut year at the venue.

McConville, who acts as the Driving Standards Observer and Investigating Officer for the championship, cut 15 laps of the 3.7km circuit on a set of the softs sent to the venue specifically for the evaluation run.

The car had lapped on hard tyres left over from the pre-season aerodynamic test running during previous pre-event promotional activities.

Learning the track and dodging entrants from the Pirelli GT support classes that were undertaking their own test programs throughout the run, McConville gave the soft rubber the thumbs up after stepping from the car.

“The tyre hung in really well over the 15 laps we did,” he told Speedcafe.com, reporting that he’d clocked a low 1:36s best.

“It just started to lose a little bit of loaded drive off the slow stuff after 12 (laps) and it was moving around a little bit in the high-speed long corners, but it was quite controllable.

“I was running with 27 Porsches and every time I got into a rhythm, I got four in a row and I didn’t want to be dive-bombing down the inside, so that was quite tricky.

“I think so,” he added when asked if the tyre would be an appropriate choice for next year’s event.

“It depends on the conditions and the temperature, but the drop-off was only about three tenths .

“I was also learning the track so clearly if you knew the track and were pushing a bit harder it might be different but I was very impressed with how the tyre hung on.”

The experience left McConville with the impression that the hard tyre will suffer minimal degradation across the four 27 laps races this weekend, each of which will see a compulsory pitstop, which can be made after Lap 10.

“The track is quite grippy – I’d say it’s a high grip circuit, but we’ll see,” he said.

“If it gets hotter then maybe (the tyres will degrade) towards the end. But if they’ve got (good) tyres then maybe we’ll see guys attack each other in the closing stages rather than sliding off the road.”

McConville will return to the wheel of the prototype Holden during a ride session on Friday afternoon, while the car will also been used in a dedicated session for V8TV.