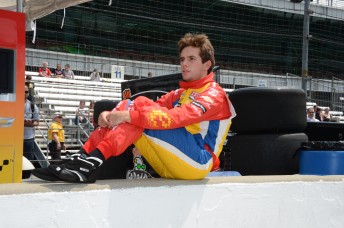 The rookie Carlos Munoz has extracted the fastest lap in the closing stages on day six of practice runs for the Indianapolis 500.

It continued a week of dominance by the Andretti Autosport team as the 21-year-old pulled out his best lap inside the last 10 minutes of the session.

His more experienced team-mate and reigning IndyCar series champion Ryan Hunter-Reay was second fastest after registering a 225.006s lap inside the final 20 minutes of the session.

“I felt really comfortable each time I went to run behind people and run race simulations,” Munoz said.

Munoz, the Indy Lights Championship leader said the team has continued to refine the car in the build up to pole day.

Aussies Will Power and Ryan Briscoe were well out of the top 10 ahead of the all-important qualifying finishing 16th and 24th fastest respectively.

The 1996 IRL Indy 500 champion Buddy Lazier made his first appearance in the #91 Lazier Partners car only performing three laps for a systems check in the Chevrolet-powered Dallara.

Rookie Conor Daly, who is interrupting his GP3 campaign in Europe to have a crack at the 500 for AJ Foyt, hit the wall exiting turn one halfway through the session in a huge accident where he was lucky not to have become fully inverted. He was later checked at the infield medical centre and cleared of injury.