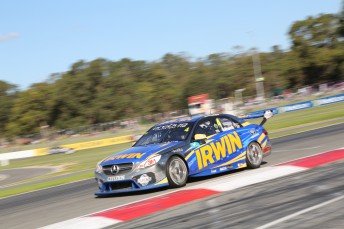 The three-pronged Erebus Motorsport E63 AMG Mercedes attack has flagged its intent to be an emerging top 10 runner by the endurance phase of the V8 Supercars season.

Team manager David Stuart further forecast continued developments around its AMG-sourced engine and improvements to the chassis will transform the outfit into a consistent top 10 runner by the end of the year.

Stuart said that the prediction for the weekend’s demanding four-race format at the Austin 400 in Texas was for its AMG fighters to be challenging just outside the top 10.

In Perth recently Maro Engel bolted into ninth in qualifying for Race 10 as the team introduced significant changes to its inlet system on the German’s #9 SP Tools entry, Lee Holdsworth’s #4 Irwin Tools car and the HHA-backed #47 of Tim Slade.

Stuart explained that by switching to an eight-butterfly manifold system which it rolled out at the Perth round the upgrade improved driveability and responsiveness on the E63s which have otherwise wallowed toward the tail in qualifying and races.

“We were able to sharpen the responsiveness right up on the entry to the corner and the mid corner. Then when you first apply the throttle on the exit it was, very, very smooth. It made the car easier to drive out of the corner,” Stuart explained in an interview with the Austin-based Speedcitybroadcast.com

“I was doing a track map of the Circuit of the Americas and we are using a different circuit to what F1 and MotoGP have used and there’s some tight corners there so its going to be interesting to see how we perform.”

Stuart added that while Erebus Motorsport still had a long way to go, Perth confirmed that the improved driveability allowed the engineers to tune more adjustment into the chassis.

“We are looking forward to more of that progress at the Circuit of the Americas,” Stuart said.

“At the moment we think we can run through the positions of 12 to 15 which is where we were able to run in Perth with the new inlet system.

“Once the drivers get more of a handle on the improved power delivery and also the engineers get a better handle on developing the chassis around that I would like to think we could break into that 8-12 (position) bracket.

“I would like to think we could do that by the start of the endurance races so by then we would be knocking on the door of the top 10 and by the end of the year we would be consistently inside the top 10.”

The V8 meeting will be conducted on the shorter ‘national circuit’ which is 3.7km in length but still features many high-speed directional changes.