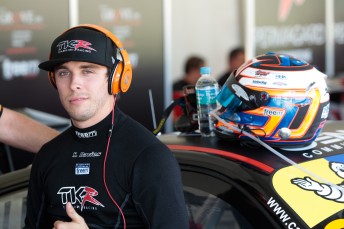 Adam Gowans will drive alongside Shae Davies in the Porsche Carrera Cup races at the headline Rennsport meeting at Sydney Motorsport Park on May 25-26.

Davies, who is undertaking his first full season in Carrera Cup, is ecstatic about linking with Gowans in the unique pro/elite shared driver meeting.

Gowans and Davies completed a group test at the former Eastern Creek venue recently ahead of the meeting which will feature two Carrera Cup 60-minute races with mandatory driver changes.

“It’s the bogey event of the year especially with the co-driver format and it’s going to be a challenge,” Davies said.

“We had a test last week and we are feeling quite comfortable together. It was a group test day with about 10 cars out there. We all had a good kick around which is great. It was good to get in a live test.

“Adam is revelling in the opportunity and it is quite a step up for him but he’s doing well so far.

“Our biggest challenge is that I’m not a tall bloke but Adam is. So the height difference is a hurdle with Adam being about a foot taller than me.” 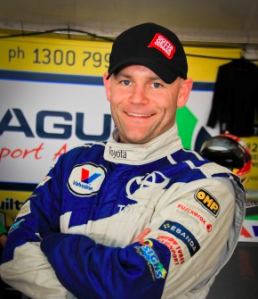 Gowans is the 2009 Aussie Car series champion and holds a slender lead in the current series in his Toyota Aurion-bodied Aussie Car.

Davies, meanwhile, is looking forward to getting back in a gripped up Carrera Cup car after his commitments in the Kumho V8 Series where he is leading the points in a Fernandez Motorsport Falcon.

The Ford is an ex-FPR built V8 Supercar which Jason Bright ran in 2007.

“It’s good to get back in a Cup car with bucket loads of grip,” Davies said.

“This is my first full year in Carrera Cup.”

Davies made his debut in the one-make category at the Gold Coast meeting in October last year as a Porsche Cars Australia wildcard guest driver which continued for the round at Sydney Olympic Park in December.

“I’ve done four rounds in total. And it’s going to be great with Carrera Cup being the main bill at SMP instead of playing second fiddle to Supercars.