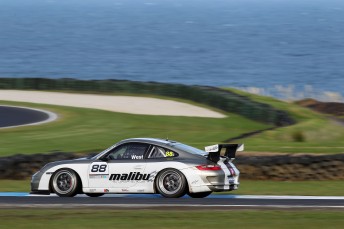 The Albury connection of Andrew Jones and the unheralded Xavier West will take the plunge in the pro/elite shared driver Carrera Cup races at the bumper Rennsport meeting on May 25-26.

Experienced V8 Supercars driver Jones and West will be running what would have been the Team Kiwi Carrera Cup racer.

It will be West’s first venture into full blooded national level competition at the special Porsche Rennsport Australia meeting which serves as the third round of the Australian Carrera Cup Championship.

West and Jones have combined in different classes in recent years and operate from premises a few doors apart in the same street in the NSW border town of Albury.

Jones and West joined up in an endurance-style event at Phillip Island last year.

“We ran in Xavier’s 2008 Cup car and the pair of us have been doing a fair bit over the last year and a bit together,” Jones said.

“This is the natural evolution of it and it’s going to be very cool.”

It will be West’s maiden Carrera Cup round on a weekend where Porsche will create a slice of Australian motorsport history with a record representation of classic and competition cars at a domestic racetrack.