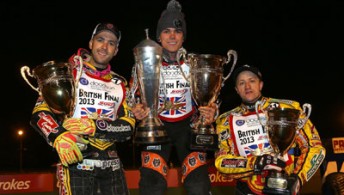 The Perth-raised Englishman has won the British Under-18 and Under-21 Titles in the past, but beating home seven times British Champion, Scott Nicholls and former Grand Prix star, Chris Harris for his first senior Title left the youngster speechless.

“I have to dedicate it to my Dad and to Lee Richardson, it’s amazing”, said Woffinden – referencing British star Richardson who lost his life 12 months to the day in a race accident in Poland and his father, a former rider who lost his battle to cancer a few years ago. His mother, Sue embraced him in front of the raucous Wolverhampton crowd where the youngster races in the British Elite League.

He got a storming start from the second gate in the Final and despite Nicholls’ best efforts, he was unable to get around arguably the hottest rider in World Speedway at the moment.

Third placing went to three times Champion, Harris. He was bitterly disappointed with his performance despite entering the final having dropped just two points. He can take heed from the fact that he will be a wildcard in the upcoming British Grand Prix in Cardiff.

In fourth placing was the unheralded Craig Cook. The 25-year-old who rides for the Belle-Vue Aces in the British Elite League earnt his place alongside Woffinden and Harris by putting in a stellar performance to lead home Nicholls in the last chance qualifier. He annexed 12 points during his five heat performances and was the undoubted surprise packet of the meeting.

Cook’s advance to the decider came at the expense of Swindon Robins’ Eddie Kennett, who up to the race-off had almost the wheel perfect event. A third place deep in the event harmed his ability to qualify directly – however Kennett showed the confidence that many feel have been missing from his arsenal and the ability to take it to the next level.

Outside them, despite pockets of brilliance, towards the bottom of the points ladder, much of the racing was processional under the grey skies and slick low line.

Ben Barker was involved in a high speed scary incident early in the meeting where his bike landed on top of him, he walked away with four points from the meeting. In terms of former Australian visitors Josh Auty scored a solid eight points, Oliver Allen five, Kyle Newman two and Joe Haines one.

However the spoils remained with Woffinden who is on a surge of confidence heading into the Czech Grand Prix this weekend in Prague.

The much revered Richardson, who finished second in 2002 to Nicholls, wasn’t far from anyone’s thoughts at Wolverhampton, with each rider having his racing hashtag #RICO on their race jackets.