Swede strikes six round WRC deal with AT Rally Team

Swede strikes six round WRC deal with AT Rally Team 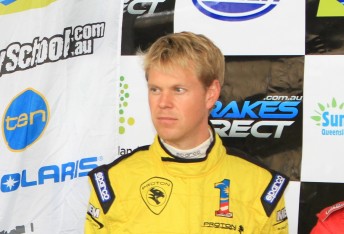 Per-Gunnar Andersson has secured a deal to contest six rounds of the 2013 FIA World Rally Championship in a Ford Fiesta RS WRC.

The Swede struck a deal with Oleksii Tamrazov’s AT Rally Team and will make his WRC return in Sardinia in June followed by rounds in Finland, Germany, France, Spain and Great Britain.

Andersson, a double Junior world champion, has only competed once in WRC machinery since finishing runner-up to Craig Breen in the SWRC in 2012.

“It’s really quite amazing that they give me this chance,” Andersson told rallying website Maxrally.com.

“I thought this season was more or less over for me until Alexey gave me this chance, I am really indescribably happy and grateful.”

Andersson will also test the AT Rally Team Fiesta WRC prior to his six round assault on this year’s championship.

Since his time as a Suzuki works driver Andersson also contested the 2012 Asia Pacific Rally Championship with the Proton works team but was unable to match the pace of Australian Chris Atkinson who won the 2012 APRC title in a Skoda.