The one-off livery that Slade will campaign in the USA

Erebus Motorsport is the latest V8 Supercars outfit to unveil a one-off livery for this weekend’s Austin 400 in Texas.

MegaTruckers is a reality program focusing on the HHA transport solutions business and is soon to premiere in the US market. 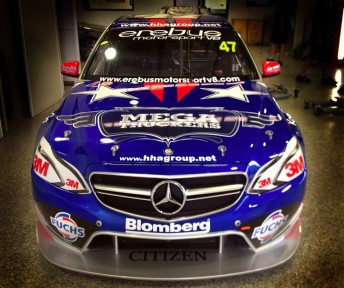 A front-view of the stars and stripes scheme

“I lived in the US for part of my life and it’s a bit like going home, so when I was in Perth I had this idea to put both the Australian and American flags together on the cars to express our friendship with the US,” she said.

“The Texas event is a special one for me as my whole family will be travelling there to watch the Erebus V8s race on the Circuit of the Americas track for the first time ever.”

Slade currently sits 24th in the points standings heading to Texas, scoring a best race finish of 13th last time out at Barbagallo.

Slade raced in an American flag-inspired scheme at selected events last year as part of a NASCAR trip promotion with former sponsor Lucky 7.