Lucas Dumbrell Motorsport has struck a one-race sponsorship deal with an American company for the historic Circuit Of The Americas meeting at Austin, Texas this weekend.

The #80 Ekol Commodore of Scott Pye, which has made headlines for all the wrong reasons over the last month, will feature signage from Big Ass Fans on its bonnet.

The company is headquartered in Lexington, Kentucky, and also runs an offshoot in Australia; providing air movement solutions for industrial, agricultural and home applications.

Big Ass Fans made its first foray into V8 Supercars at Barbagallo two weeks ago as a minor-sponsor of Paul Morris’ Dunlop Series Holden.

LDM team principal Lucas Dumbrell hopes the association with the firm could extend further than the one-off deal at Austin. 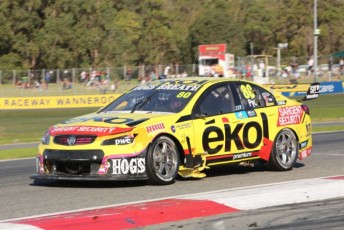 The company, which has ties in NASCAR, is planning to entertain a large group of corporate guests at the V8 Supercar meeting at the highly acclaimed Austin circuit.

“It’s obviously great to get a local company on board and hopefully it may get a few more people along to the event,” Dumbrell told Speedcafe.com

“Big Ass Fans is getting quite big in Australia. This is just a one off for Texas but I’d love to do something more with them.

“I think they enjoyed their experience in Perth. It was enough to warrant getting on the main car.”

Pye was forced to sit out the New Zealand round early last month after the Commodore suffered huge damage in a front-end crash after brake failure at the Symmons Plains round and could not be repaired in time to make the Trans-Tasman journey.

At his comeback meeting in Perth, Pye was involved in a massive incident when his car rocketed sideways and became airborne. The end result was a long list of damaged parts and components.

The V8 Supercars and associated freight were airlifted to the US yesterday ahead of the maiden race meeting for an Australian championship on American soil.