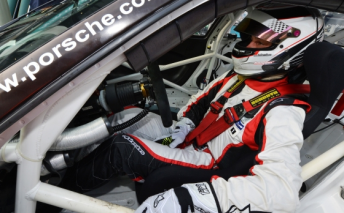 Young Kiwi ace Earl Bamber has been snapped up to share the drive with Stephen Grove at the big Rennsport pro-am Carrera Cup meeting at Sydney Motorsport Park from May 24-26.

Bamber, 22, has answered a call by Grove to plug a vacancy after Daniel Gaunt was forced to withdraw from the meeting last week.

Gaunt is now required to replace Andrew Waite in the Tasman Motorsports Group V8 SuperTourer at Pukekohe which clashes with the Porsche meeting. Waite broke his wrist in a low-key Honda Cup meeting 10 days ago.

Highly regarded, Bamber recently stormed to double victories in the Porsche Carrera Cup Asia round at the Zhuhai track in China.

Bamber, runner-up to Mitch Evans in the 2010 Toyota Racing Series, has built up a wealth of experience stretching from open-wheel categories including Formula BMW Asia, Superleague and Formula V6 Asia and Porsches.

He is looking forward to teaming up with Grove for the Pro-Am meeting that is punctuated by two 60-minute races.

The Wanganui-born racer has moved to a slender lead in the Asian Carrera Cup for the Craft Nexus Racing team.

The Rennsport meeting and its associate categories is expected to attract several hundred competition cars from the Zuffenhausen maker and thus create and Australian record.