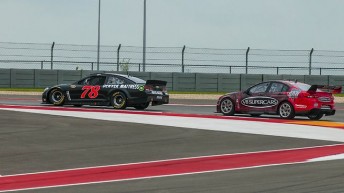 V8 Supercars in Texas. Will it be embraced by the locals?

Australia’s leading motor racing category is taking a huge plunge into the unknown this weekend when it stages a championship round in Austin, Texas.

Taking the show Stateside to the Circuit Of the Americas breaks new ground for V8 Supercars which has broadened its reach following its drive to push into overseas markets through the early to mid-2000s.

The series made its first move into Asia by staging a round at the Shanghai International Circuit in 2005, a year later than it was first scheduled.

The China experiment lasted just one year before the series then did a deal to run in Bahrain in 2006 where it held a round of the Championship until 2010.

It then did a deal to run the opening round of the series at the extravagant Yas Marina circuit in Abu Dhabi in 2010 and 2011 before it was moved onto the Formula 1 Grand Prix support card for 2012 and dropped from the calendar this year.

Just how many times V8 Supercars will visit Texas remains to be seen, although the deal is said to be for five years.

Americans are well served through all forms of motorsport but the lion’s share of the corporate and fan dollar rests in the world of stock car racing with the NASCAR Sprint Cup.

Aussie Marcos Ambrose, the 2003 and 2004 V8 champion, has entrenched himself in NASCAR since the mid 2000s and believes it will be difficult to win over the support of American fans.

Have your say on the topic of whether the Americans will embrace the V8s.