JR Hildebrand turns ‘Man Of Steel’ at the Indy 500

JR Hildebrand turns ‘Man Of Steel’ at the Indy 500 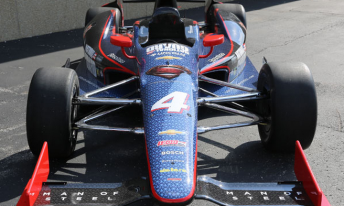 Driver JR Hildebrand’s Panther Racing #3 National Guard car will sport special ‘Soldier of Steel’ livery for the world’s great open-wheel race at the Brickyard on May 26.

The striking paint job is designed around the launch of Warner Brother’s Superman feature film release Man Of Steel next month in the US which stars Henry Cavill as Superman and Kevin Costner, Amy Adams and Russell Crowe in support roles.

“Representing the National Guard is a huge honor for all of us at Panther and being able to come to the Indianapolis Motor Speedway in the ‘Soldier of Steel’ paint scheme is another great way for us to do that,” Hildebrand said.

“There’s a pretty seamless connection between these soldiers and Superman; they’re both just ordinary citizens serving their community. So for us being able to compete in an iconic event like the Indianapolis 500 in Superman colors is just another way to highlight all the unbelievable things the National Guard does for this country. For us, the soldiers have always been the real superheroes.”

Hildebrand will join teammate Townsend Bell to attempt to qualify for the race on May 18. Panther has finished runner-up in four of the past five years. Hildebrand finished second in his rookie year (2011).

Bell’s No. 60 car will have ties to another feature film — DreamWork Animation’s “Turbo,” which is due in theaters July 17.

Hildebrand and Bell will work with technical partner Dreyer & Reinbold Racing and No. 22 driver Oriol Servia leading up to the race.