A computer generated image of Garth Tander’s car, which is currently on its way to the US

The Holden Racing Team will be waving the Australian flag on its V8 Supercars at the Austin 400 in a move it says will celebrate the upcoming export of the Commodore VF to the United States.

The HRT entries will carry the Australian flag on their roofs and rear quarter panels in a one-off livery tweak for the event.

As reported earlier today, all 15 Holdens that compete in the championship will retain their Holden badges in Austin as part of the ‘Aussie-made’ theme instead of making the mooted switch to the Chevrolet SS moniker.

VF Commodores built in Adelaide, South Australia, will be exported into the US market as Chevrolet SSs from later this year.

“Commodore has built an incredible heritage in its 35 years while HRT is the sport’s most successful team,” said Holden’s motorsport and sponsorship manager Simon McNamara.

“We are extremely proud of new VF Commodore; it’s a world class car with world-leading technology and amazing performance credentials, which has opened up new export opportunities for Australia. 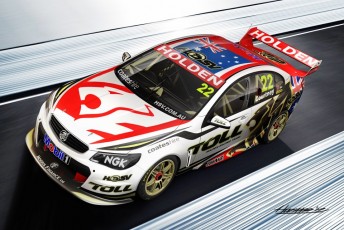 “So, with V8’s first trip to the US we couldn’t think of a better time to stamp the Holden Racing Team’s VF Commodores as ‘proudly Aussie-made’.”

The HRT heads to the US on a 50 race losing streak, with the team struggling for speed last time out at Barbagallo while debuting a heavily revised front-end on its cars.

Courtney has been V8 Supercars’ main poster-boy for the Austin event; the 2010 champion cutting what he has jokingly refereed to as ‘100s of laps’ of the Circuit of the Americas in the category’s Commodore Car of the Future prototype during the build-up.

Courtney’s one and only race win with the HRT came on foreign soil at Yas Marina, Abu Dhabi, in 2011.

The now 32-year-old is one of just four drivers in the current V8 Supercars field to have raced in the US before – taking the start in Japan’s SuperGT Championship’s 2004 event at California Speedway, Fontana.