Commodore V8 Supercars to race as Holdens in Texas

Commodore V8 Supercars to race as Holdens in Texas 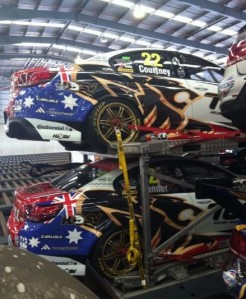 A spy shot of the HRT entries at Brisbane airport. pic: twitter

Holden badge-work will feature on all 15 Commodore V8 Supercars at this weekend’s Austin 400 as its factory team takes on an Australian-themed look.

Although V8 Supercars’ Commodore Car of the Future prototype appeared in Austin in March wearing the badges of Chevrolet, the famous bow-tie will not appear on the race cars themselves.

The potential for re-branding was discussed by the General Motors sister companies before a decision to keep the Australian nameplate was made.

The decision is set to please many Australian fans who voiced their displeasure at the possibility of Chevrolet badge-work via social media when the first pictures of the prototype car in Texas appeared.

The factory Walkinshaw Racing outfit had been involved in single car Buick and Chevrolet marketing exercises when the V8 Supercars visited Shanghai and Bahrain in 2005 and 2007 respectively.

A one-off livery for Walkinshaw Racing’s third Russell Ingall-driven entry has already been revealed for the Austin 400.

The factory Ford and Nissan outfits meanwhile have claimed pseudo ‘home team’ status for the event.

Ford Performance Racing will run Austin branding on its cars due to a deal with the local tourism authority, while Nissan’s yet-to-be-released in Australia Altima model is built in nearby Tennessee.