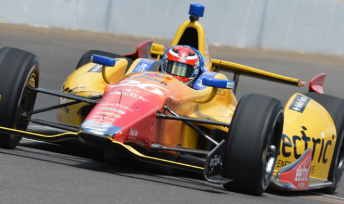 Rookie Carlos Munoz has topped the times from the opening two practice sessions in the build-up to the Indianapolis 500 on May 26.

Munoz, who has been drafted into the Andretti Autosport squad, cracked a 223.023mph lap (40.3545s) at the Brickyard in the second practice session to be the quickest on combined times after turning 92 laps.

Hunter-Reay said: “We really don’t know where we stack up yet compared to everybody because we haven’t had a full field out there yet. Today was a good day to just check some things off the list.”

Fourth fastest was Marco Andretti ahead of AJ Allmendinger with the top five all registering their best laps in practice session #2.

A total of 31 cars competed in the opening weekend practice for a combined total of 1028 laps around the famous oval.